The decision by C. albicans to form hyphal filaments is based on cues that it receives from the environment.

Nutrient sensing and the decision to form hyphae in C. albicans

Candida albicans is an opportunistic fungal pathogen and the major cause of human fungal infections. It resides commensally on the mucosal tissues of the human body but it is also responsible for causing superficial mucosal infections and life-threatening systemic infections. The occurrence of fungal infections has greatly risen during the past few decades, and this rise is linked to an increase in the number of immunocompromised individuals who are susceptible as well as the increased use of implanted medical devices and prosthetics that provide a niche for formation of biofilms.

The morphology of Candida albicans changes from a yeast form to pseudohyphal and true hyphal forms. The transition from yeast form to the filamentous forms is linked to virulence. Understanding the molecular nature of the transition from the yeast form to the filamentous forms is important to finding ways to block fungal pathogenesis. Signal transduction pathways are important for the development of hyphae and pseudohyphae. Among these are the cAMP, MAPK and two-component signaling pathways that recognize the extracellular conditions and that induce filamentation by changing the pattern of gene expression. Key transcriptional regulators have been described as important for the changes in transcription, although a full understanding of all of the necessary transcription factors and their regulatory roles is far from complete.

We are focused on the transcription factor Grf10 and its role in linking nutrient sensing with filamentation.
​ 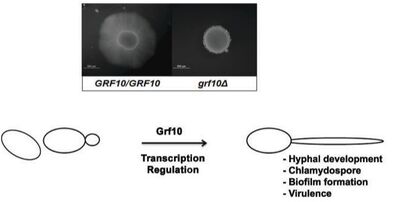 ​The Grf10 homeodomain protein is required for filamentation

Grf10 is a homeodomain protein that we hypothesize is important to link nutrient levels with filamentation.  The grf10 mutant is unable to properly respond to hyphal inducing signals.  The consequence of this is that filamentation is defective, chlamydospores are not produced, the ability of the fungus to produce a biofilm is decreased, and there is attenuated virulence (Ghosh, Wangsanut et al., 2015, FEBS Yeast Research 15(8), fov093).

Homeodomain proteins bind weakly to an abundant simple DNA sequence (TAAT) and require interaction with a partner protein to recognize authentic binding sites and bind to them with high affinity. 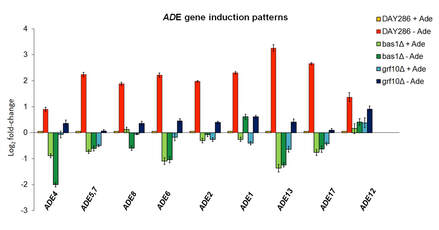 Tanaporn (Gift) Wangsanut examined the requirement for the Grf10 protein to up-regulated the ADE genes, that encode the AMP biosynthetic pathway.  As shown on the right, cells will turn on expression of the ADE genes in response to growth in the absence of adenine (red bars vs. yellow).  Additionally, she found that both Bas1 and Grf10 are necessary for cells to be able to fully up-regulate expression, and that Bas1 is important for basal expression.

She found similar responses for the genes MTD1 and SHM2 involved in one-carbon metabolism, and for NUP that encodes a nucleoside permease (Wangsanut et al., 2017, mSphere 2, e00161-17). 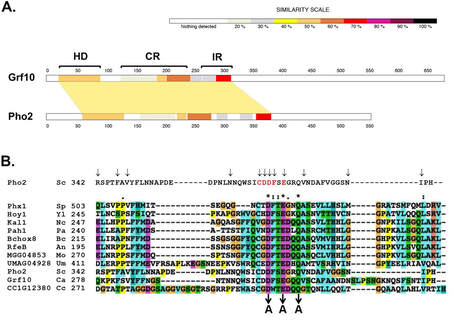 The Grf10 transcription factor from Candida albicans is related to the Pho2 protein from Saccharomyces cerevisiae.  Both proteins have a homeodomain in the N-terminus (HD on the left schematic), a central conserved region (CR) that is important for structural integrity, and an interaction region (IR) that is important for interaction with partner proteins such as Bas1.

Panel B shows that the IR has been conserved across a wide range of fungal species, including ascomycetes such as Saccharomyces (Sc)and Candida (Ca), plant and animal pathogens such as Botrytis cinerea (Bc), Aspergillus nidulans (An), and Magnaporthe oryzae (Mo), as well as eatable mushrooms such as Coprinopsis cinerea (Cc).

Mutations in this region, as denoted by the down arrows affect the ability of the Grf10 protein to express genes associated with filamentation and AMP synthesis (Wangsanut et al., 2018, mSphere 3(5), e00467-18).